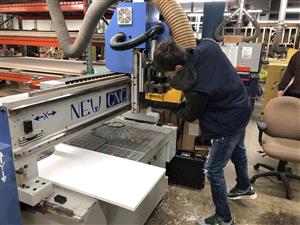 According to CTE Engineering and Wood Technology Instructor Jeff Wykrent, earlier in the school year, Production Management One contacted Wykrent to see if students would like to take on the task of cutting/engraving the seal that would be used on the governor’s podium during the Inauguration Ceremony. Mr. Wykrent then turned over the project to the class production manager, student Robert Haworth, who saw the project through. The design was provided by the governor’s office.

Students then took the design and created G-code that could be read by their CNC router. They cut the seal out of a few different types of material in order to figure which would yield the best results. Due to the size of the design and details needed, the students made the decision to change the way they were manufacturing the seal. They took the design to the class laser engraver and found that it was able to cut the detail needed for the given design. After experimenting with different settings and materials, a final seal was engraved on their laser. Throughout the process, pictures and findings were shared between the class, Production Management One, and the governor’s design team. 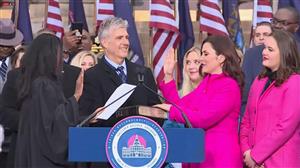 Students had to use their classroom knowledge and problem-solving skills for this project. According to student Robert Haworth, “I really liked working on this project because I had to experiment and solve problems in order to get the result that was needed.”

“When I took over the program last year, the students prided themselves on being student lead and student run,” said instructor Jeff Wykrent. “By being able to execute a project like this, on their own, just solidifies the pride and respect I have for all of my students.”

The seal that the students produced was then sent back to Production Management One’s Detroit office where it was painted and prepared for the inauguration speech on January 1, 2023. The production company says there are plans to have the seal displayed at the governor’s offices.