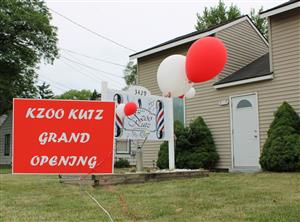 Lockett is a 2020 Loy Norrix graduate, and during high school, he participated in the barbering program offered by KRESA Career and Technical Education (CTE), formerly known as Education for Employment (EFE), which operates within the West Michigan College of Barbering and Beauty.

Lockett said that he decided to take part in the CTE Barbering Program after one of his friends, Tanaja Hudson, introduced him to it.

“Since I was already cutting my own hair and a few friends, I saw it as a great opportunity to learn more and gain experience,” said Lockett, who went on to describe some of the many benefits that the barbering program provided, including meeting new people.

“It forced me out of my comfort zone in a positive way and made me more social,” explained Lockett. 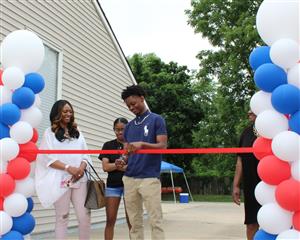 According to Lockett, one of the biggest advantages to being in the Barbering program for which he is grateful was the cost savings.

“The course was paid for,” said Lockett, “which I don’t take for granted.”

According to the West Michigan College of Barbering and Beauty, normally the cost of Barbering school is $18,794, a cost that is eliminated for students who participate through the Kalamazoo RESA CTE Barbering program.

During the barbershop's grand opening ribbon-cutting ceremony, Lockett was surrounded by his family and friends. He expressed gratitude to his many supporters, especially his family, saying it was a huge factor in helping him succeed. “Without the support,” he said, “I wouldn’t be where I am now.”

Lockett also gave credit to the KRESA CTE Barbering program for giving him a jump start on his path to entrepreneurship as a barbershop owner.

“It feels a little unreal being a business owner at 20 years old, but I’m making it happen,” said Lockett. “I’m just glad that I was blessed with the mindset and opportunity to create and run a business.” 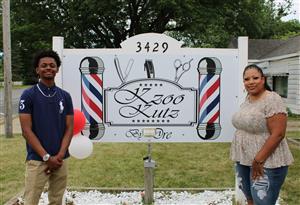 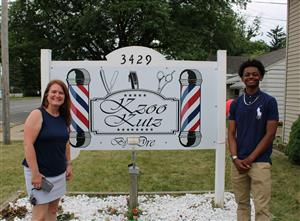 Also in attendance at the Kzoo Kutz grand opening were Lockett’s former barbering instructor Aliah Wafford and KRESA CTE Program Coordinator Diane Fort. Both expressed how proud they were of him.

“I always knew he had it in him,” said Wafford with a huge smile. “I’m not surprised at all.”

“Andre was always mature beyond his years,” explained Diane Fort, CTE Program Coordinator. “He had a dream, and he took full advantage of the opportunities CTE provided him to make it a reality sooner rather than later in life.”

Fort went on to acknowledge the hard work and dedication involved in Lockett’s success.

“He finished the barbering program,” said Fort, “which is an achievement in normal school years due to the 1800-hour State requirement to sit for the license, but he also did so during a pandemic.”

While Lockett listed the many positives involved in participating in the CTE barbering program, he also acknowledged that it was not without its challenges.

“I had to really prioritize barbering school,” he said. “I was working a part-time job while I was attending the program, and also, with me being a sporty guy in high school, I had to cut out sports and put that time into the program.”

Despite the sacrifices, Lockett said, “I wouldn’t take anything back,” adding, “Look where I am now.”

Lockett’s Aunt Twala Lockett-Jones represented him as his realtor and helped find the building which would eventually become home to the new barbershop, Kzoo Kutz. During her speech at the grand opening, she expressed her pride and appreciation for the dedication it took for her nephew, who the family affectionately nicknamed “Buddy,” to get where he is today as a business owner.

“Buddy is very tenacious,” began Lockett-Jones, “He does not give up, and when he has something in his mind that he wants, he works really hard.”

Lockett’s Aunt Twala explained that she has met with him and other family members during what she refers to as “nephew meetings” to discuss subjects such as financial literacy, entrepreneurship, saving, giving, being generous and “just being good citizens.” She feels that he took that advice and ran with it, and that is part of what brought him to where he ended up today.

“He set goals. He saved. He did everything right,” explained Lockett-Jones. “He didn’t take any shortcuts—there are no shortcuts.” The crowd seemed to agree with those words according to the echoes of “yes” and “that’s right.”

“When you want something, you’ve got to go through it to get to it,” said Lockett-Jones, “and Buddy never gave up.”